Demonic Positivism versus The Science of "natural born Citizen"
About Demonic Positivism
Demonic Positivism is the New World Order religion of belief in false Presidents, false governments, false public laws, and false legal systems, wherein the legal system and rules of society are removed from Nature, i.e., divorced from the Natural Law jurisdiction.  This means that the society is only governed by the dictate opinions of an elite ruling privileged class of those with titles, like ‘attorney’, ‘judge’, or ‘Congressperson’, through misuse and criminal abuse of the Positive Law, that body of law which government is allowed to legislate by authorization of the People in a Republic.

Since 2008/9 under the false President Obama, these special ruling elite non-representative persons are the only ones empowered to decide and dictate to you what government is, and what rights you have, and what defines reality.  They do this by unauthorized false Positive Law decrees, divorced from the Natural Law limits set in the United States Constitution, regardless of what Nature determines is reality, what the natural rights of people are, and how a representative republic government is defined by the Constitution and by law.

This has been the reality of life in America since 2008/9 when the non-qualified Obama rose to usurp the Constitutional Republic, overthrowing the Constitution and government, establishing a religio-monarchy dictatorship government by illegal decree.  What constitutes law, a representative government, and what constitutes Nature and reality, is no longer recognized as a matter of objective scientific jurisprudence by the Congress, the courts, the news media, or the population at large, since 2008/9.

This book, and its website, was created as a response to the fraudulent declarations that Barack Obama is a “natural born” Citizen, and thus a President, which are lies and falsehoods told to the American public for the purpose of enslavement to dictatorship.

Demonic Positivism is an evil false religion, divorced from the rules which govern Nature, “the Laws of Nature and of Nature’s God” as stated in the Declaration of Independence, divorced from the laws of the Creator of Nature.  It is the violent political religion practiced by the majority of the world who call Obama ‘President’ when he is not a “natural born” Citizen as required under Natural Law and under the U.S. Constitution.

The American Constitutional Republic officially ceased to exist in 2008/9 with the inauguration of an obviously naturalized citizen into the Office of President.  This Office is reserved only for the offspring of citizen fathers from a State of the Union, which is how “natural born” Citizen is defined under Natural Law and under U.S. positive law.  With the illegal and unlawful declaration by Congress and the news media that Obama is a “natural born” Citizen and ‘President’, which are both obvious lies, the Republic was overthrown and you were enslaved under dictatorship without any true representation in Congress.

If you do not want to be a slave that is dictated to, under the rule of men rather than under the rule of law, then read the book Demonic Positivism versus the Science of “natural born” Citizen to understand what it actually means to be a Patriot, and to become enlightened to the truth so that you will be empowered to take back your country and your freedom. 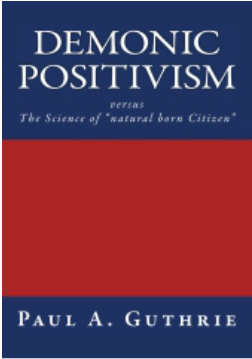 Buy the Book
About the Author

Paul A. Guthrie is a renaissance man: a natural scientist, a political scientist, an expert scholar of Natural Law legal theory, and a historical and legal analyst.

A graduate of Purdue University class of ‘87 with degrees in Applied Physics, Mathematics, and Electrical Engineering, in 1992 he abandoned the non-progressive world of academia to chart his own course and continue independent studies in physics and law.

Never intending to become a writer, Paul Guthrie was forced to bring lost knowledge to light when the American People were tricked into selecting a legally-defined King instead of a President in 2008.

He has authored Demonic Positivism versus The Science of “natural born Citizen”, which explains the Natural Law basis of Just government in a republic, and shows how this standard of justice has been suppressed from the current legal system in order to pervert the law to religio-monarchic ends, notably in the presidential eligibility issue and the gay marriage issue.
Powered by