Demonic Positivism versus The Science of "natural born Citizen"

Start Your Journey To The Truth

There are only two mistakes one can make along the road to truth,
not going all the way, and not starting.
- Buddha 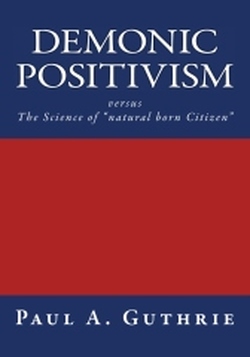 The Book:
Demonic Positivism versus The Science of "natural born Citizen"

Discover the shocking truth being denied and kept hidden from you, of how Obama and Bush Jr. before him have incited war against the U.S. Republic and the republics of the world, against Nature, and against the Creator God.

This book exposes the facts about the empire-building which has now critically escalated to enslave America and the whole world, and threaten global destruction.  This situation has been allowed to happen because of the public’s lack of real understanding of the principles enshrined in the U.S. Constitution, and of the standard of justice which has been suppressed, the Natural Law.

Learn the truth about the secret war against America which has already overthrown its Constitution.  Forget what you’ve been told to believe, here is the scientific proof that Obama is NOT a natural born Citizen, was never qualified to be President, and by legal definition is actually a King!

You will see how those entrusted with public offices have destroyed our freedoms, by ignorance or criminality.  You have been stripped of your natural rights by a ruling privileged class of attorneys and judges, who think themselves above the People and the Law.  They are misusing the law to enslave you.  This book will empower you to expose their lies and take back what they have stolen.

But this book is about so much more.

Discover what the philosophy of Jesus had to do with creating the secular U.S. Republic and preventing a religious government.  Learn about the real Jesus, the philosopher who was the son of a human father, and what Jesus was really about, all of which was hidden and reinterpreted to suit the agenda of the Roman Church.  Learn the science which decodes Jesus’ real message.

Find out how to claim your own divine birthright and manifest your spiritual destiny to create a new era of peace based upon the true principles of freedom, rather than let the world slide into a new world order of fascist empire.

Part shocking exposé, part educational manual for a new age, part personal testimony, this is the story of one man’s struggle to bring sanity back to America, his astounding discoveries and the persecution he endured for standing for the truth.  What Paul Guthrie discovered affects the future of every human being.

Read this book to open your eyes to the Greatest Story Ever Told of mankind’s spiritual evolution, and take up your part as an inheritor of the Earth.
Buy the Book (U.S.)
Buy the Book (U.K.-Europe)
Powered by